What is Bikini Atoll? That’s a good question. A very long and complicated good question. Bikini Atoll is just one of about 29 atolls and 5 islands that comprise the Marshall Islands, or, as they’d like to be known as, the Republic of Marshall Islands. That republic part is also something drenched in a complicated history I’d rather not get into, so we’ll take their word for it.

Something I bet you’re wondering, and I know you are, is, “What makes Bikini Atoll so special?” Well, I’m not sure your what your definition of special is; but if it, in any way, includes being the guinea pig of numerous nuclear weapons tests, then Bikini Atoll is quite special.

The first actual missiles used were part of the Operation Crossroads operation. While Operation Crossroads does sound like a fun name for a scavenger hunt, this hunt was more catastrophic than even the most boring of scavenger hunts. Un-fun fact: these bombs were, at the time, the first detonations of nuclear devices since the Nagasaki Incident of 1945. The purpose of this test was to see how nuclear weapons affected war ships. That’s the official purpose, though, whereas the real one was probably a more juvenile reason.

The first test, Able, was a disappointment because whoever was flying the bomber plane missed the target point. Now, if that sounds bad, just imagine that guy missing out in the field. “Oh, did I miss the enemy base? Well, what did I hit? A small fishing village!? Those latitudinal lines always did get me, sir!”

Regardless of whether you now fear the competency of the U.S. air force, know that the second test, Baker, hit the target point and was a complete success! Well, a success in that it hit the relative area it was supposed to, but a sort of bittersweet victory in that the sea spray from the blast caused massive contamination, resulting in the possible genocide of pretty much everything living in the general vicinity. Well, at least they hit the right spot, which must count for something.

The U.S. military looked at these two massive “successes” and thought, “Man, we got a pretty good thing going on here. Why don’t we do a third test? What’s the worst that could happen?” The only problem was the target ships were so contaminated that decontaminating them was almost as impossible as the common core AP Calculus exam. I’m about 75% sure that test doesn’t exist, but you can imagine how bad that’d be if it did exist.

This third op, nicknamed Charlie, was relocated and demoted to a deep shot somewhere off the Californian coast in 1955, some 8 or 9 years after the initial Crossroads tests.

There were four-sum sets of tests done to this poor place. There was a strange pattern to them. Bomb a location, see the amount of contamination it does and let your jaw hit the floor as the amount of damage and contamination exceeds your wildest fantasies or, I’d reckon most plausible, vicious nightmares.

Since these guys were almost consistently blown away by the power behind these things, I think it’s safe to say they really had no idea what they were in control of, like a ten year old behind the wheel of a stick-shift.

Let me give you one more example. The castle set included seven tests. Castle Bravo was particularly devastating to the land. Now, the Bravo bomb is considered the biggest nuclear explosion ever detonated by the United States. It’s also, unfortunately, one of the largest cases of accidental contamination ever done by the U.S. in the context of nuclear weapon testing. The U.S. does a lot of contamination, and so radioactive ones must be distinguished as to not make light of all the other garbage we are the cause of.

What made this bomb so devastating was not just the power behind it, but some key factors of a human variety, the first of which being that the fallout landed on the residents on Rongelap and Utirik, two of the atolls that comprise the Marshall Islands. It took three days to evacuate these people; by that time, it was too late, leaving many residents with radiation sickness. Even worse, they were returned to their island some three years later. Their welcome home gift was not a feast or celebration, it was for them to relocated again after the island was found to still be uninhabitable.

Lastly, and this is the worst part, the reason they kept this test a secret is because they didn’t expect the explosion to be so big. The actual yield was 15 Mt. The estimate by the designers? Oh, around 4 or 5 Mt. I don’t know about you, but when I took geography, if I was more than a degree off on either side, I lost credit. These guys mysteriously lost 10 Mt of power. This isn’t like losing 10 cents. This is like dropping 10 million dollars out of your pocket while trying to fish out a membership card at a grocery store.

What could cause such a big clerical error? Well, it’s actually a big error, so calling it clerical is pretty forgiving. In the bomb, the scientists only accounted for one isotope, the lithium-6, being reactive. There was, however, another isotope: lithium-7. This second isotope, assumed inert, comprised 60% of the entire lithium content in the bomb. This is the cause behind the unanticipated force. Now, to be fair, the reasoning behind the lithium-7 reacting is actually quite technical and was easy to miss, especially when talking in a theoretical sense; but still, these calculations went through many hands and the fact that each person missed it is profound.

The people and the ecosystems of Bikini Atoll were forever transformed by these tests. Even to this day, advocacy for the islands is still a hot issue. This is a testament to how man, when in possession of something they truly do not understand, can destroy and hurt so many lives. People were relocated from their homes to islands no humans inhabited, mostly because of how harsh the living conditions on some of the Marshall Islands are. Strangely enough, even after all the research and knowledge gained since that time, we seem to be no more capable of protecting the world from ourselves than we were back then.

To end this post, I would just like to stress that I, in no way, find these events funny. They are horrid monstrosities of human behavior and a true strength in showing the vastness of human ignorance. I only use humor to stress how angry I am with how we’ve treated the people of the Marshall Islands. Here’s another piece of information; think of it as an addendum to this entire discussion.

In 2001,  the Nuclear Claims Tribunal awarded the islanders a total of $563,315,500. Congress, our congress, failed to fund the settlement. The check must have got lost in the mail or something. Instead of doing the humane thing and, I don’t know, swallowing their pride and funding the settlement, when a petition for Congress by the islanders to fund the money reached the Supreme Court, the appeal was turned down. Why? To honor the United States Court of Appeals’ decision not to compel the government to fund the claim. That’s pretty sick, isn’t it? And it still, to this day, makes no sense. We still, to my knowledge, have not honored this valid claim.

I got all this information from the wikipedia page on Bikini Atoll and this site: https://www.bikiniatoll.com/

The atoll, with large craters in the northwest indicative remains of the Castle tests, specifically Castle Bravo. 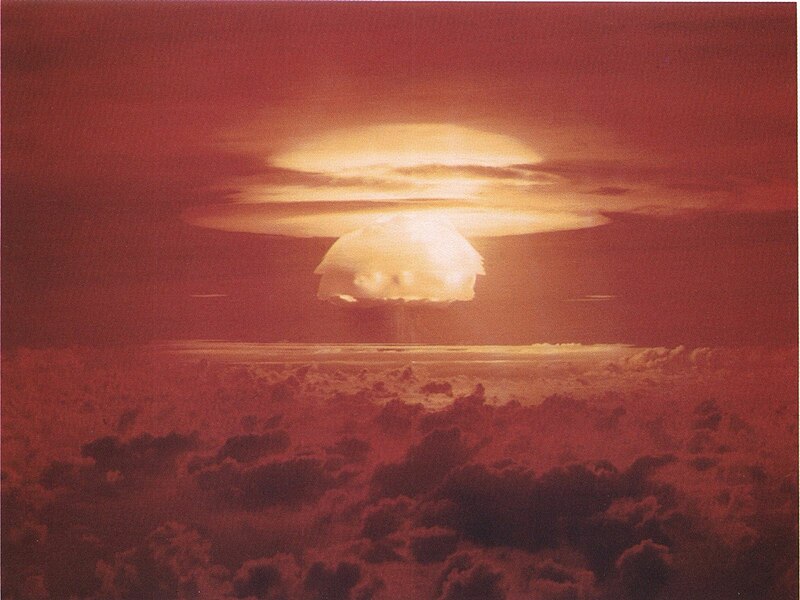 Castle Bravo mushroom cloud: the last thing you want to see outside of your window on a Summer morning. 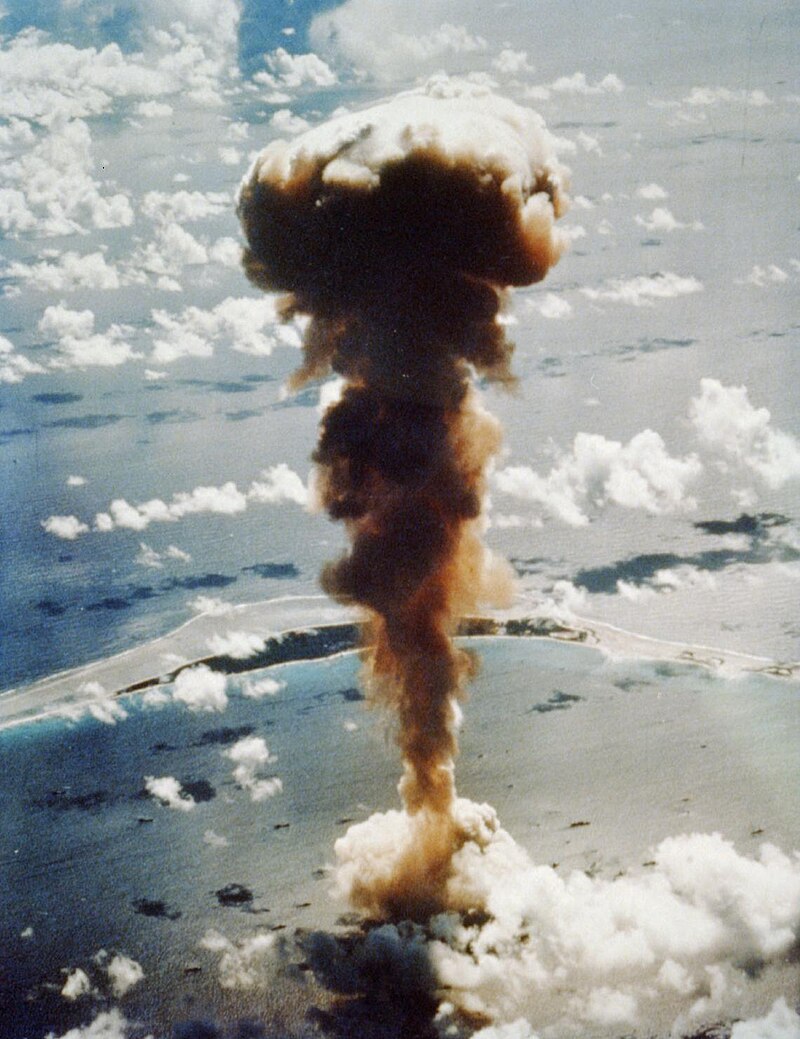