Island of the Gas Masks

Southeast of Japan, Miyake-jima is an island nestled comfortably in the Izu group. The Izu group is made up of 17 islands, including Miyake-jima. All of them are volcanic, with nine of them being inhabited by humans. One of these nine is Miyake-jima.

Miyake-jima is habitable, sure, but that’s like saying that the Sahara Desert in the middle of July is habitable. It’s possible, and most likely true, but it’s not a fun or relaxing location to hang out in. I think I’d rather live on Mingulay and strangle birds while trying not to look down.

What makes Miyake-jima so terrible? I’m glad you asked, my friend. Being a volcanic island, there is a volcano sitting somewhere on the island. Being a volcano, it’s hard to miss, but I’ve learned not to make assumptions about the things people will look over.

While most volcanic islands that have people living on them are somewhat dormant, or have a relatively low chance of disrupting–which, by the way, is VERY difficult to determine–Miyake-jima is not one of these.

On the 14th of July 2000, everything changed. Not only did the first series of Big Brother UK begin, but Mount Oyama, the island’s volcano, erupted.

It, interestingly, was not just one eruption. There was a first, obviously, but there was a series of eruptions that continued from the first. It took until September for the entire island to be evacuated. There was traffic, I suppose.

A mere FOUR YEARS LATER, the residents were allowed to return. Why did it take four years? Traffic? Nope. The volcano erupted consistently for four years. That is insane. Not even island time can explain or excuse this number of eruptions.

This must be the worst part, right? It couldn’t get any worse, right? Actually, it can, and it did. When the residents returned, they were greeted with a wondrous little present. They discovered that Mount Oyama was leaking something. While I wish I could say it was leaking sunshine and rainbows, it was actually leaking something called sulfuric dioxide.

Sulfuric dioxide: the Oxygen of Hell. Not only does this compound smell awful, it is among one of the most poisonous gases on the Earth. It seems a lot of Dioxide gases are not very good for humans, but I’m going to assume that’s just a coincidence because I’m no chemist.

The islanders had to find a way to adapt. They could just leave, but they won’t. They instead came up with an idea: gas masks. They don’t have to wear them 24/7, mind you, there are bells and droning sirens that provide a warning to the islanders when to wear their masks. Therefore, they must carry a functioning mask with them all the time.

For all intents and purposes, though, this is a relatively normal island. They have a small governing body that is in league with the other islands in the Izu chain; they have schools and an over-arching culture. Tourism–yes, tourism–is very big on the island. Their coral reefs are great for diving; they have a large and diverse amount of flora and fauna and a large number of bird species. All of these, unfortunately, are under constant threat from Mt. Oyama; but for now, these biological majesties still thrive.

The island with Mount Oyama. 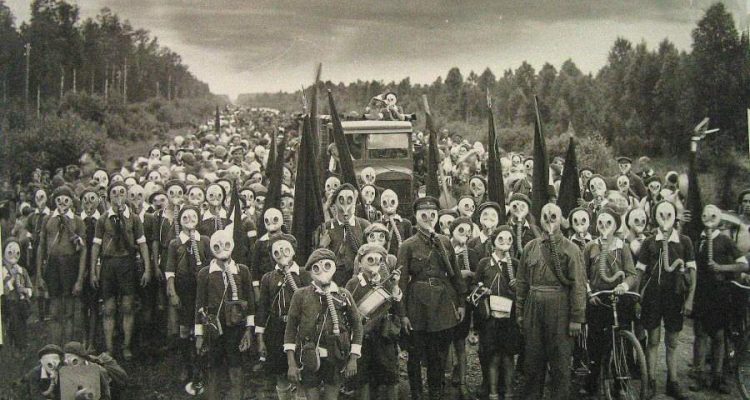 Is that death I smell? It smells like sulfur.

6 Responses to Island of the Gas Masks