Guess where this island is! If you thought France your wrong and I’ll never talk to you again. The Island of Arranmore, Aranmore or Árainn Mhór  is a tiny island that is about fifteen minutes/3 miles from the Irish shore of county Donegal. The island itself is pretty unremarkable, no rare species of birds fly above its skies. No rare fish swim near its shores. So what is so impressive about this little island?

First off this island threw a lot of archeologists off. Many believed that the Celtic culture originated in England around the 6th century BC (British Iron Age). However this little island has shown that their were Celtic people living in Ireland from the 8th century BC 200 years earlier then first thought. While the evidence is still being argued, some archeologists like John Waddell, have accepted the possibility of earlier migration to Ireland then originally thought. Evidence to support this is a fort that dates back to 8th century BC, and they’re still arguing about evidence. 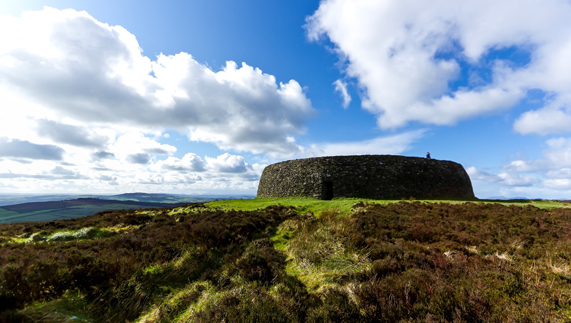 The island was also hit hard by the Irish Potato famine and was a major part in the “Donegal Diaspora” in which many Irish were forced to leave mostly forced migration. Many islanders fled to the “twin island” of Beaver Island in lake Michigan, USA. The island was chosen after Charlie O’Donnell, his wife and their three young children were evicted from their homes and forced to the USA and settled on the island, soon many Arronmore islanders settled on the island. After the Irish famine many people on the island returned to Arronmore and to their homes. But to this day many people living on Beaver Island can retrace their roots back to Arronmore. In 2000 a monument was built off the coast of Arronmore to commemorate the islands bonds. On one side is a beaver and an American flag on the other side is an otter with an Irish flag in the middle is a fish that joins the two. The designer must have been drunk. In 1935 a ship carrying 15 Arronmore men and 5 family + freinds was destroyed on their voyage home from Scotland. The boat ran into some rocks throwing all the people into the sea nine were able to make it back onto the ship but the ship turned again throwing them all back into the water Patrick Gallagher was able to make it back onto the ship with the captain, his father Edward and his brother John. After a few hours Edward lost consciousness and fell back into the sea and Patrick’s brother John died in his arms. Patrick was the only survivor. Patrick’s mother lost a husband, 4 sons and 2 daughters and was said to lose her mind and mail her friends in Scotland, after one sons and one daughters bodies never returned to shore, under the impression that they were still alive and she believed that till the day she died. A poem was written for the event:

Good people dear , pray lend an ear , ill tell you one and all ,

its about a great disaster , that occured off Donegal ,

for the wild Atlantic ocean has added to its toll ,

another 19 victims may the Lord receive each soul .

It was in the year of 35 on a bleak November eve ,

this awful tragedy took place it caused us all to grieve ,

those cheerful lads were coming from the Scottish harvest fields ,

and to the stormy oceans their lifes were forced to yield .

What cheerful thoughts were in their mind when sailing up Lough Foyle ,

to view the hills of Inishowen , and land on Irish soil .

The little train came slowly on through Creeslough and Gweedore ,

When they arrived at Burtonport , they were met upon the pier ,

they laughed and chatted with their friends all in the best of cheer .

They set out for the island , but never reached the shore ,

a cloud of grieve and sorrow hangs over lonely Arranmore .

The little boat by Gods command across the waves did sail ,

but only one out of a score survived to tell the tale .

He saved two other passengers , but they perished in the cold ,

The highest praise must be his due this hero , true and bold .

So now dear friends this one request , I ask from one and all ,

pray for the 19 victims , who were lost off Donegal .

With St Patrick and St Brigid , may they dwell for evermore ,

In a land were hardships are unknown far away from Arranmore.

So what’s the economic drive of this island? Before the 1980’s the main export from this island was fish however in recent years tourism and education programs have overtaken the economy. Now the tourism is not a majority of foreigners it is actually teenagers and young adults from Ireland that go to the Gaeltacht summer schools Voluntarily!!! These summer schools teach the teens the original Irish Celtic language and teach young adults how to become “Irish” teachers, teach about Irish history/language. The islanders of Arranmore have classified this as tourism because more then 400 people come to the island during the summer months to learn Irish language/culture.

The island is also home to some of the highest percent of Celtic Irish speakers at approximately 62% still speaking/writing the Celtic language. However most are bilingual so their should be no problem in communication if a person spoke English only.

The cost to get to Arronmore from Donegal is about 45 euros. A flight to Donegal airport from JFK round trip is approx 850 us dollars. So if you ever go to Donegal and aren’t drunk go visit this little island.